Here I talk about how Bedouins living in unrecognized villages in the Negev, with the help of local and international civil society organizations, defy government attempts at erasing them from the map.

AL ARAQIB, Negev Desert, Israel, Feb 20 2015 (IPS) – Lehavim Junction in the northern Negev in Israel has been the backdrop to protests against home demolitions in Bedouin localities for the past four and half years.

Every Sunday, inhabitants of the Bedouin village of Al Araqib and their supporters stand behind a large banner reading ‘Stop Demolishing Al Araqib’ in English, Arabic and Hebrew. To the rhythm of clapping hands, the younger ones shout slogans into the PA system, ‘Jews and Arabs can live together’, ‘Stop demolishing our homes’.

Last month, the ‘unrecognised’ village of Al Araqib was demolished for the eightieth time in four and half years. Despite the absence of a ruling adjudicating ownership of the lands of Al Araqib, the state is planting a forest on the Al-Turi Arab Bedouin tribe’s ancestral lands. 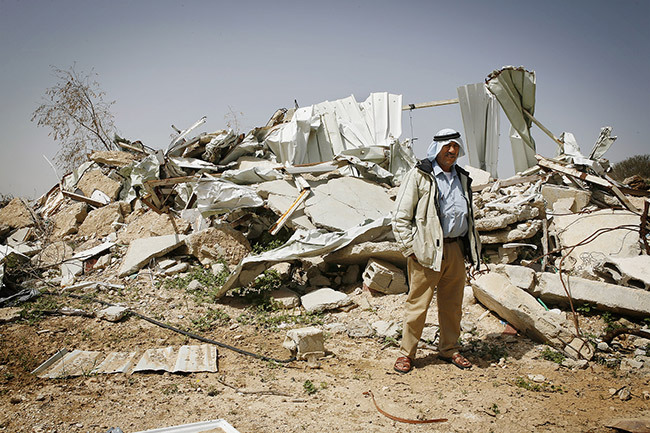 “The newspapers here don’t write about Al Araqib,” Mariam Abu Madegham Al Turi, a young inhabitant of Al Araqib told IPS. “These weekly protests are a way to show that we exist. It is part of our sumoud (steadfastness), our resistance.”

Once in a while, a sympathetic driver passing the junction honks the horn in support, a sign of the niche interest that the situation of the Bedouin in the Negev still arouses in the wider Israeli public.

And yet according to a recent report titled ‘The House Demolition Policy in the Negev-Naqab’, published by the Arab-Jewish Negev Coexistence Forum (NCF) non-governmental organisation, the situation in Al Araqib is far from unique.

NCF advocates for civil equality in the Negev-Naqab and is the only NGO methodically documenting house demolitions affecting Bedouins. They counted 859 in the twelve-month period between July 2013 and June 2014

The level, it confirms, has remained virtually unchanged in the past four years and the high numbers “attest to the incompetence of the state in offering durable solutions” to the crisis affecting the region.

Since the Prawer Plan bill ‘to regulate Bedouin settlement’ was frozen at the end of 2013 following mass outcry from the Bedouin community, NCF claims that “in the absence of a legislated plan”, the government is using home demolitions as a policy to limit Bedouin land rights and still implement its vision of development for the Negev.

Development for whom and at what cost is the question posed in the NCF report. “The state does not need this land for development,” Michal Rotem who co-authored the report, told IPS.

“They just want it clear,” she said. “Planting a forest is not in my view a reasonable excuse to demolish a village. And neither is making room for a Jewish settlement. These are racist and discriminatory excuses.”

Bedouins are indigenous to the Negev, are Israeli citizens and number roughly 220,000, or 30 percent of the region’s population. About 140,000 of them have been forcibly urbanised and live in seven failing townships planned by the government in the 1960s and 70s, as well as in ten ‘recognised’ villages. 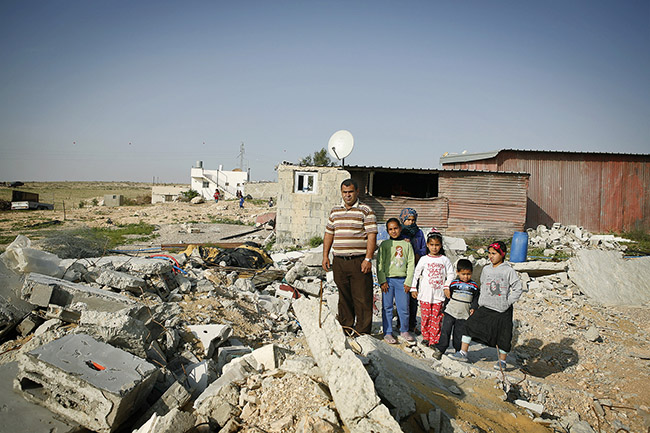 The remaining 80,000 live in 40 localities that are not recognised by the state, do not appear on any map and are at constant risk of demolition, as is the case with Al Araqib.

As Rotem explained, these communities often pre-date the state of Israel but a policy of nationalisation of land turned their inhabitants into ‘invaders’ of state land. “Imagine,” she said, “a state came, legislated its new laws and declared all of the Bedouin community in the Negev criminals, that’s what happened.”

In the past forced urbanisation was offered as the only path to becoming ‘not criminals’, but today those who did urbanise have very little to show for what they gave up.

The NCF report reveals that 54 percent of all demolitions in the period assessed took place in ‘legal’ localities. This means that no provisions were made to accommodate the lifestyle or the natural growth of the Bedouin community, which has the highest fertility rate in Israel.

“This completely contradicts state plans,” Rotem told IPS. “First they tell Bedouins to live in recognised localities and then they go and demolish there too.”

Jalal Abo Bneah is a field coordinator with NCF. He lives in the ‘unrecognised’ village of Wadi Al Nam and knows all too well how these ‘contradictions’ affect people’s lives.   “For example,” he told IPS, “the government wants to move the 15,000 people of Wadi al Nam to the township of Segev Shalom. But there is barely enough space in the township for the people already living there. How is this going to work?”

Abu Bneah stressed that there is growing dissatisfaction amongst the Bedouin community with unilateral governmental plans that ignore their needs. “They show no respect for anyone. Not for the people in the recognised localities nor for the ones in the unrecognised villages. Where do they want us to go?” he asked.

Last October, the United Nations Human Rights Committee adopted a number of concluding observations on the fourth periodic report of Israel. For example, it stressed that the state refrain from executing demolitions based on discriminatory planning policies and that it consult Bedouins on plans regarding their future.

Abo Bneah welcomes pressure from global actors but given the current right-wing political climate in Israel, he holds little hope that change will come soon.

In the meantime, to counteract state efforts to erase the Bedouin, NCF has launched a website that seeks to set the record straight regarding the true topography of the Negev. The ‘Arab Befouin Vilages in the Ngev-Naqab’ project puts all 40 ‘unrecognised’ villages on the map of Israel, something the state has so far refused to do. 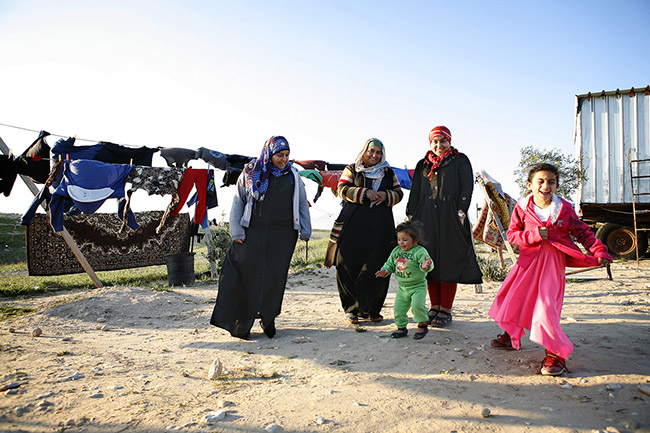 The website allows visitors to learn basic facts about each village, such as date of establishment, number of inhabitants or distance from public services and to see photos of the homes, the nature or the inhabitants. The residents themselves will soon be providing more images, especially documenting demolitions

Just like the weekly demonstrations at Lehavim, the ‘Arab Bedouin Villages project’ helps make the Bedouin more visible, their experience of state power public and their narrative of the past known, but there is more work ahead says Abu Bneah.

“There is still a lot of ignorance out there, especially among the Jewish public,” he stressed. “They still think we took the lands of the state and that is not true.”

For Mariam and the others in Al Araqib, being told by their state that the Bedouin do not exist or that they are ‘criminal invaders’ only makes their commitment to sumoud stronger. “We are here and we are not going anywhere,” Mariam said. “This is our land and, until we live, we will stay.”