Another piece following my Australian travels. Here I talk to Aboriginal and Torres Strait Islander elders who are coming together to demand representation from below.

The piece was originally published on AJE.
All images © silviaboarini.com

Australia’s Aboriginal and Torres Strait Islanders activists hope 2014 will be remembered as the year they said: “Enough is enough.”

Rosalie Kunoth-Monks has no doubt about it. “We are under assault,” she tells Al Jazeera.

The 77-year-old renowned Aboriginal activist from the somewhat ironically named region of Utopia, Northern Territory, paints a bleak picture of a human rights crisis in the Aboriginal community.

“This assault is a punitive eradication of the ‘other’ culture in Australia, Aboriginal culture,” says Kunoth-Monks. “Our language and the attachment to the land are really being crushed as we speak.”

Aboriginals and Torres Strait Islanders are the indigenous inhabitants of Australia, who despite being granted full citizenship in 1967, are still not included in the constitution. Nor has their wish to enter into a negotiated treaty which would define their place within Australia been granted.

No redress and little progress

Killed in the hundreds of thousands by European settlers following the arrival of Captain Cook to the continent in 1770, Aboriginals and Torres Strait Islanders have been subject to catastrophic policies ever since, including forced assimilation, removal from ancestral lands and finally an urbanisation that, they claim, ignores their cultural needs and denies their basic human rights.

Despite promises of redress for past mistreatment made by successive prime ministers, such as that of Paul Keating in 1992 or Kevin Michael Rudd’s formal apology for the Stolen Generation in 2008, little progress has been made by state institutions to dialogue with this minority, say activists.

Even now, the indigenous population features at the bottom of most socioeconomic indices.

Between 2008 and 2012 there were 628 suicides among Aboriginal people, nearly twice the rate for non-indigenous Australians. In the 25-34 age group, the rate rose to three times more.

Incarceration numbers are amongst the highest in the world. Aboriginals and Torres Strait Islanders total 700,000, or roughly 3 percent of the Australian population but currently represent 27 percent of the prison population.

Aboriginal adult incarceration increased by 57 percent since 2000, while the juvenile incarceration rate is around 24 times that for non-indigenous people.

The independent charity Human Rights Law Centre (HRLC) adds that the number of indigenous women in prison rose 18 percent in the past year. 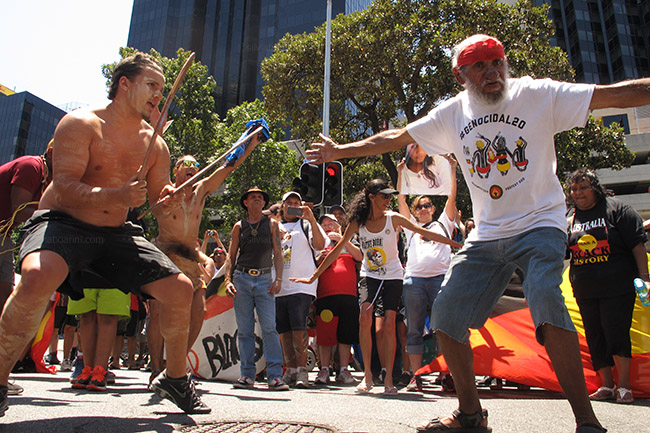 ‘Learning to be white people’

The charity recently brought death in custody and incarceration statistics to the attention of the UN Human Rights Council (UNHRC) at its 27th session. This came at a time when a 22-year-old Aboriginal woman died after four days in police custody. She had been detained for unpaid fines, HRLC reports.

Another emergency highlighted in the OID report is the continued and increasing removal by social services of indigenous children from their families. This number rose from 2,944 in 2003 to 14,267 in 2013.

Nigel Scullion, federal minister for Aboriginal affairs maintains that the Australian government is on the right track.

“The report reinforced the Abbott government’s priorities in Indigenous affairs,” he said in a media release. These priorities are getting children to school, adults into work, and ensuring communities are safe.

“The approach is very much ‘Let’s turn Aboriginal people into us’,” she tells Al Jazeera. “It is not looking at how to address the trauma, it’s just wanting to get them into work, white schools and learning to be white people.”

“Psychological stress alone is an important indicator of the failure of government to address increasing incarceration, removal of children or suicides,” she explained.

It is the sheer scale of this crisis, coupled with a feeling of disenfranchisement, that is lending fresh energy to the grassroots’ struggle for equal rights.

In Adelaide, South Australia, veteran Aboriginal activist Tauto Sansbury knows the report tells the true story of the difficulties faced by his people.

“There is so much denial in Australia from state and federal government. They say this is not happening. But the attacks are more and more visible,” he told Al Jazeera.

A feeling that the resistance spirit of previous decades had been co-opted by state institutions led to Sansbury’s call for a National Freedom Summit for Aboriginal People, “to create new solutions for the ongoing mistreatment”.

“In the 1960s-1980s we had a lot of what I call ‘great freedom fighters’,” Sansbury commented, acknowledging crucial gains in areas of labour and land rights. “But leading into the 1990’s and beyond, Aboriginal Australia has not been moving forward.”

The fear, activist claims, is that it may be moving backwards as hard-fought legislation such as the Aboriginal Land Act (Northern Territory – NT) of 1975 or the Native Title Act of 1993, are being overturned or applied selectively.

A famous instance of this was the 2007 Northern Territory Intervention, which saw the federal government taking control of a number of Aboriginal communities enjoying Native Title under the false pretence of combating paedophilia.

Privately funded and held in Alice Springs at the end of November, the Freedom Summit attracted over 100 community leaders from across Australia. It brought land rights, sovereignty and self-determination back on the agenda.

“Self-determination will come when our bureaucracies and our ministers sit back and let us start doing our business,” explained Sansbury.

Kunoth-Monks and Sansbury are among 21 delegates nominated at the Summit to return to their communities and discuss priorities ahead of the planned sit-in in Canberra on January 26, and the election of an Aboriginal National Body.

Aside from having a galvanising effect, the summit indirectly pointed to the perceived failures of other representative efforts.

Both NCAFP and the Freedom Summit leaders agree that the current handpicked indigenous Advisory Council, which informs government on policy, is not working.

Over 150 Indigenous programmes and activities will be mainstreamed into five and $534.4m will be cut from the budget over five years, he wrote.

At the 27th session of UNHRC, the HRLC raised the subject of funding conditionality. “Gag clauses” are preventing indigenous organisations in receipt of governmental funding from engaging in advocacy and law reform activities.

“They are taking away our right to participate in decision-making,” Solonec stressed. “We are not able to speak up and all these tough decisions are imposed on us without our consent.”

“Western culture always has this belief that it knows what is best for you,” Sansbury told Al Jazeera, referring to the historic lack of meaningful consultation with Aboriginal communities. “That’s one of our biggest obstacles.” 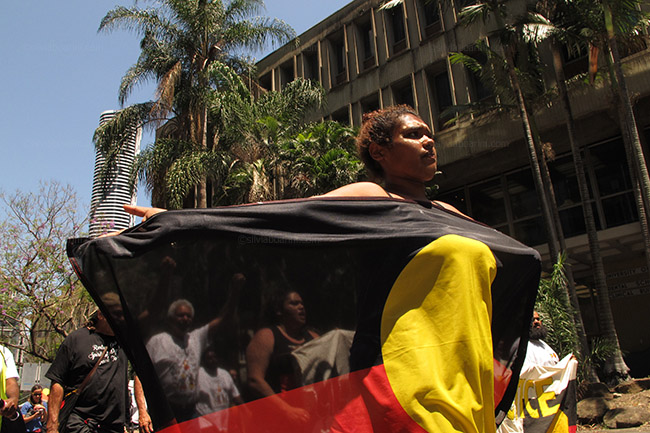 The next Universal Periodical Review of the human rights situation in Australia is scheduled for 2016. Among other issues, it will scrutinise Australia’s implementation of the Declaration of Human Rights of Indigenous People.

The summit delegates wish to look beyond the solutions and frameworks set up by successive white governments and aim for sweeping changes.

“I believe it is time to push for a real process of reconciliation,” Kunoth-Monks stressed. “Where prior-ownership is acknowledged, as is the fact that sovereignty was never ceded.”

Most of all, Kunoth-Monks wishes for respite and the freedom to be black.

“My people must be left alone, to really take a breather and choose their destiny,” she said. “We feel we’ve got the big white man’s boots on our throat.”